Welcome back to another Write On Purpose book review. I share well-written books. I highlight what makes each good from the reader’s perspective, and reveal what writing skills and techniques make it an irresistible read. Thus, each review serves both writers and readers. This time, it’s a time travel romance set in Scotland titled Little Bit out of Time by Alice White.

This is a time travel tale with a splash of rmance. Here’s the description from Amazon.

Little Bit out of Time is definitely a worthy read for anyone who enjoys magic, humor, and  time travel with a dash of romance.

Little Bit out of Time by Alice White 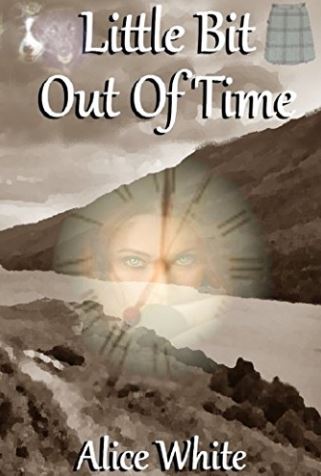 In a small, Scottish town, a peculiar event at the local loch makes Ellie McTavish question reality—and her sanity—on a cool spring evening excursion.
Jolted out of time, she encounters strange folks, strange places, and even stranger events.
But how did she get there?

I gave the book a 5-star Amazon review. You can read my 5-star review here.

What made tis quirky novella a worthy read?

A Fun and Interesting Point of View Character

Our protagonist Ellie is quite a character. She’s a snarky Scottish woman who spouts off all sorts of fun phrases inside her head, such as “flibberty-jibbet” and “fan-ruddy-tastic.” Her mouth tends to get away with her, and her snark simply won’t go st in the corner and behave. All this makes for an interesting person, and we’re inside her head through the whole story.

As the tale begins, Ellie awakens soaked to the skin and missing her 2 dogs. She wonders if she’s also lost her sanity when an oddly dressed Scotsman comes to her aid.

Along the way, she encounters two dragons, a cousin (figuratively speaking) to Nessy (the Loch Ness “monster”), and some men who most definitely mean her harm.

As it turns out, she’s left her modern-day life and traveled back in time.

Alice White has made a video book trailer for Little Bit out of Time.  Watch the trailer now.

This is a good idea for authors to do, as it gives readers a sense of the book’s flavor and story (or content for nonfiction). I love the scene that shows as the video thumbnail.

I love having good examples of deep point of view to share. POV is one of those aspects of writing that most of us struggle with at some point. I used to have a lot of trouble going deep enough. Now, not at all. But then, deep point of view wasn’t as big a thing back then as it is  now. I prefer going deep to other styles.

Deep point of view means you’re right there in the character’s thoughts with no perceivable distance.

Here is an example from the opening of the book:

What have you been up to, Ellie McTavish? Get yourself together.

Drenched, frozen, and confused, I stand at the edge of the water.

This makes for a compelling read as you live through everything with the character.

Writing in present tense has become the fad of late, it seems. Not sure why. Present tense brings an immediacy to a story that past tense cannot.

Whether or  not you like present tense is simply a choice. Some find it jarring. Others enjoy it. I sometimes write in present tense and sometimes in past, depending what feels right given the particular tale I’m telling.

Backstory is all about what has happened to a character. It usually emerges in a story in the form of memories. The character recalls when she heard that phrase used or when he met her, and that provides insight so that the reader can follow the tale.

We as authors are “supposed” to write memory in the past tense. That’s  how “they” say it’s to be done. They being other writers. Since memory is experienced in the now and feels like now even though it’s in te past, I find it strange to put recollections in past tense. I understand “they” tell us to do it to make it clear this is a memory, but it still seems odd to me. I mean in any book, not especially in this one.

Alice white does an excellent job weaving memories into the plot without making me as a reader feel I’m getting an Ellie McTavish history lesson.

Characters Are Not Always What They Seem to Be

I love reading a book in which the POV character has an opinion or beief about another character that turns out to be wrong, or when the author provides evidence to make one person seem to be one way when the opposite is true. It’s fun.

You’ll find someone in this book who acts in ways that make this person appear to be an emery, perhaps calling yet more trouble to Ellie. Not everyone is who they seem to be in Little Bit out of Time. Brava.

The pacing of a book, movie, or TV/streaming program is something a reader feels but may not consciously realize. An action scene should feel fast, maybe even breathless, because something exciting or scary is happening. A chase should never feel like a Sunday stroll.

When the danger is over and the hero is catching her breath, you would expect the pace to slow. Any story has a variety of paces. All fast or all slow wouldn’t feel right, because life speeds up and slows down at various times.

Likewise, when revealing a key to the plot, the author needs to slow it down and not let the character blindly or hastily accept something just because another character says it.

I have some issues with the author’s pacing in a few places. I notice this in all her books, though. I’d love for her to lean into the struggle more and draw out those dramatic conflict scenes.

It’s tricky, and I am not saying for a moment that I always “get it right” either. I used to rush past the conflict. Though we as humans want less conflict, we want to read about insurmountable odds and really dig deep into the struggle…in a book. I guess that makes our own lies seem better by comparison.

When there’s a conflict, as the author, you really want to lean into the it and make the reader feel how scary or intense it is. You don’t want to rush past it.

One place where Alice does this well, without spoiling the plot for  you, has to do with several men surrounding Ellie. She lets Ellie really live that scene. Another is later in the book where Ellie spills the beans to a man she barely knows.

One place I have trouble with the pacing has to do with a comment about a handshake that comes later. Ellie accepts the explanation Kindra gives without much pushback, question, or doubt.  She also seems to accept a revelation about her own nature too quickly for me as a reader.

More about this in a moment as it relates to…

You may think world building is only for science fiction and fantasy authors, but it’s actually not. Authors create a world in their stories, whether they’re about present-day New York, 1612 Scotland, a mythical land, or an alien planet. Within each world are rules.

Overall, Alice White does a great job creating the world, and the reader can follow and accept this world as real within its context.

You’ll notice in the world of Little Bit that the nature of the dragons she meets is revealed in how they smell. One smells of cedar, the other of rot. I’m sure you can guess which is the ally and which the enemy. That works just fine. Given their behavior, the reader can easily accept this aspect of the novella’s world.

There’s something called “willing suspension of disbelief.”  That’s what allows a reader to accept that in one book dragons or magic work this way and in another book, they work differently. It’s part of the world of that particular book, show, or movie.

There’s a key point in the book regarding physical contact between witches. It’s definitely new to Ellie AND to the reader, and this bears something more than easy acceptance on her part. This is an area where world building and pacing comingle. The reader is going “what the…?” and needs Ellie to question it or have trouble believing, or we need Kindra to provide a little more insight.

Likewise, when a character comes to a life-altering self-realization, I wouldn’t be swallowed whole and accepted lightly. If someone told you that you are an alien from Alpha Centauri, I doubt you’d just say, “Really? Cool.” (No, Ellie doesn’t say that. It’s just an example to make a point.)

These are not huge issues, or I wouldn’t have given Little Bit out of Time 5 stars. Most books you’ll read will have a thing or two that doesn’t set perfectly with you. Writing is an art and a huge challenge.

I absolutely love the humor in this book And being funny is not easy. The humor is one of the strongest elements of this story. Being inside Ellie McTavish’s head is fun. Her self-deprecating infernal comments often made me laugh. the Britishisms are a riot. You can baffle your bestie by calling her a flibberty-jibbet.

Alice White does a masterful job convey in humor without being heavy-handed or over-the-top about it. Deftly done!

Little Bit out of Time is definitely a worthy read for anyone who enjoys magic, humor, and time travel with a dash of romance.

You can order Little Bit our of Time in paperback or Kindle format.

Buy Little Bit out of Time on Amazon.