Writing is a funny business. I never know what will spark my imagination It could be anything from a line on a TV show to a song lyric to an encounter at the grocery store to a misty morning…

Yep, I have actually dreamed up stories. The Assassin and the Prince, one of my fantasy novellas, is just such a tail…and tale.

While the purrsonality of feline assassin Aree owes inspiration to my former companion, Tica, that’s where the connection to anything here in earth reality ends. 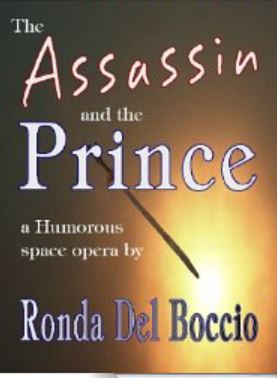 My Muse gifted me with an exquisitely detailed dream about this assassin who found what looked like a cush job, a short gig working for a family seeking a security guard to protect their son, who wanted to go on vacation without his parents.

Aree soon regrets her decision to take a job protecting a pampered young prince who seems to her little more than a spoiled brat of no substance.

For his part, the sheltered Crispin has never been around other sentient species, so he has a lot to learn about how to treat those who are different. (So do most humans living here on earth who need only encounter different nationalities and religions…but I digress.)

OK so I guess hat’s another relation to reality.

The dream provided every detail of the story, including characters, fight scenes, conflict, and loads of funny bits. It’s definit3ely a humorous paranormal story.

I will post an excerpt in a few days. You can read The Assassin and the Prince on any device. It’s available both on Amazon and on Smashwords.

You never know what will come of a dream.

Tagged: The Assassin and the Prince

The Assassin and the Prince

Feline assassin Aree's "cushy" new security job makes her tail twitch. She has to protect a pampered prince on vacation, and he drives her CRAZY! But as soon as they leave his sheltered homeworld, she must put all her skill to good use in order to save his life.