Welcome back to another Write On Purpose book review. I share well-written books. I highlight what makes each good from the reader’s perspective, and reveal what writing skills and techniques make it an irresistible read. Thus, each review serves both writers and readers. This time, it’s a science fiction thriller series called Mind Dimensions Omnibus by Dima Zales. 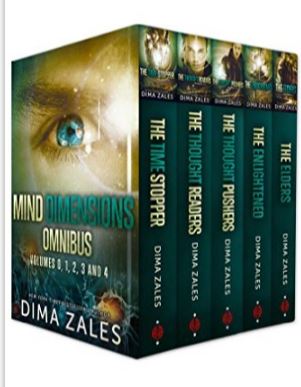 I received a free copy of the set in exchange for an honest review. I love stories about mind powers, and that’s what attracted me to this set. I had not been familiar with the author before now. Before I share my truthful review, here is more about the series:

All 5 books in the popular Mind Dimensions series from a New York Times bestselling author, available for the first time in one convenient, discounted omnibus edition. Over 1500 pages of thrilling action, adventure, and unique mind powers.

Darren’s had it easy his whole life. Finishing Harvard at eighteen, a lucrative job on Wall Street at twenty-one—all things are possible when you can cheat by stepping outside time. Thanks to his ability, he’s a know-it-all, but what he doesn’t know is how he’s able to do what he does.

That is, until he meets Mira and discovers her dangerous, hidden world.

Mira can stop time, but she can’t change anything. After her parents are murdered, she’ll do anything to get revenge—even take on the Russian mob.

Darren’s life turned upside down when he met Mira. Now, as he races to uncover his own identity, he confronts new enemies—and realizes his unique powers might extend further than he ever imagined.

Kidnapped, consciousness expanded—and that’s just the start of Darren’s day. As a new danger comes to light, he has one chance to save a loved one’s life and avenge the wrongs of decades past.

Some crimes can never be forgiven.

Ultimately, Darren has to make a choice.

What is he willing to sacrifice for those he loves?

What did I think of the series?I gave Mind Dimensions Omnibus a 5 star review.

Painting this with a broad brush, science fiction stories tend to be either character driven or idea driven. Here, you have a little of both, not one or the other. The scientific idea behind the series has to do with theories of time, chaos and possibility. Add to that the thriller flavor of bigger-than-life protagonist and other interesting characters who have fully developed histories.

Every book is its own world, and in realms of science fiction, fantasy, and paranormal powers, it’s even more so. Why? Because the reader is carried outside reality into another world. The rules of this world have to make sense within its context. Zaires and Zales crafted a world in which some people have special mind powers. Each classification of ability is well thought out.

Lots of Action + Food for Thought

Action adventures and thrillers are fun. I like them in my literary mix. I also enjoy when a book with chases, secrets and death threats also gives the reader something to ponder. Numerous ethical issues arose as I watched Darren, Mira and the others navigate their lives.

You’ll encounter some new terms and ideas in the Volume 0 prequel, The Time Stopper, as will protagonist Darren. Asked whether he is a reader or a pusher, he doesn’t know how to answer.  Along the way, you’ll find out what makes someone Enlightened in this worldview and meet other powers.

Hot-shot Darren, who finds himself thrown into a whole new world when he meets someone else who seems to share his powers, is in some ways at a disadvantage. He was never trained how to use his abilities. Yet in some ways, this is a huge advantage for him, because he never learned the limits that supposedly come with his Mind Dimension powers. I enjoy stories that play with polarities in this way.

Dima Zales’ books are available all over.

Get the Mind Dimensions Omnibus set.

If you want to start with the prequel, get The Time Stopper.

If you’d like to know when the next book comes out, please sign up for Dima’s newsletter at www.dimazales.com.

Dima Zales is a New York Times and USA Today bestselling author of science fiction and fantasy. Prior to becoming a writer, he worked in the software development industry in New York as both a programmer and an executive. From high-frequency trading software for big banks to mobile apps for popular magazines, Dima has done it all. In 2013, he left the software industry in order to concentrate on his writing career and moved to Palm Coast, Florida, where he currently resides.

Dima holds a Master’s degree in Computer Science from NYU and a dual undergraduate degree in Computer Science / Psychology from Brooklyn College. He also has a number of hobbies and interests, the most unusual of which might be professional-level mentalism. He simulates mind reading on stage and close-up, and has done shows for corporations, wealthy individuals, and friends.

He is also into healthy eating and fitness, so he should live long enough to finish all the book projects he starts. In fact, he very much hopes to catch the technological advancements that might let him live forever (biologically or otherwise). Aside from that, he also enjoys learning about current and future technologies that might enhance our lives, including artificial intelligence, biofeedback, brain-to-computer interfaces, and brain-enhancing implants.

After graduating from the University of Chicago with a degree in Economics, Anna spent eight years on Wall Street analyzing stocks and writing research reports. In 2013, she became a full-time author, pursuing her lifelong dream of writing romance novels.

Dima Zales is the love of her life and a huge inspiration in all aspects of her writing. Every book Anna writes is a product of their unique collaborative process.

She loves hearing from her readers, so please don’t hesitate to drop her a note through her website or connect with her on Facebook, where she hangs out way too often. Also, please visit her husband and collaborator, Dima Zales, at www.dimazales.com, and check out their fantasy & science fiction books.