Recently I’ve discovered the coolness that is Smashwords, a free way to publish in a variety of digital book formats. Simply by uploading a Word doc file, I can get my book into places like Kobo, Apple iBooks, and Barnes and Noble.

So I figured that I would put up some of my work, including a couple novellas and today, “Trouble’s Turn: a Mystical Animal Allies Short Story.”

I had a dream that became this story. Though this tale doesn’t resemble the dream, it got me thinking of the life of the animal Allies of Native American spirituality and what their lives are like.

In American Indian Wisdom, each person has an “Ally,” an animal spirit guide who helps them live a good life. Trouble in this story is a young White Wolf trying to figure out her place in the world.

Why Smashwords and not just Amazon? I’ll go over that another time, but the main thing is I can’t make the short story free for everyone (not just Kindle Unlimited subscribers who pay) on Amazon.

I’m so excited to share the COVER of this short story along with the link where yu can get it in the format of your choice. 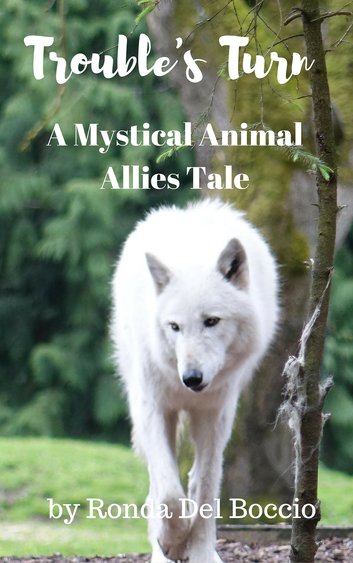 Here’s an excerpt from “Trouble’s Turn”:

From our Den far above the earth, I sit in the Place of Watching and gaze through the hazy veil to observe our Two-legged charges, who call themselves the People. There is a special window that allows us to see them. All the Allies have their way of watching. We Wolves have our Den, the Hummingbird Nation has a huge Flower that I would love to see, and the Buffalo Nation watches through a pool of water in the plains where they live. I only know this from hearing the older ones talk about their travels, and I can hardly wait to have those adventures myself.

Supposedly, I am too young to start watching The People, but I don’t know how I’m going to learn how to help them if I know nothing about them. That’s one of those things the adults never explain to my satisfaction. I’m not a pup anymore, after all. I’m almost adult, too mature to want to play with the whelps and not old enough or experienced enough or not whatever else enough to take on the responsibilities of being one of the Allies of the People. I get bored, and that always leads to me living up to the name they call me.

Life down on earth seems to be going along as usual, and it’s not all that interesting either just to watch. I see females tanning hides, drying meat, or mending clothes. Pups…boys…are chasing each other and playing warrior practice games. Bent males smoke a pipe or teach the young pups.

A warning whoop catches my attention as well of those in the village below. Warriors rush back to their pack with news, and now women leave tasks half done and call out for their young to come to their sides.  Men take up weapons and the elders call the People to gather. They rush around, making sure all their clan is safe. A woman calls out, “Where is Runs From Snakes?” It must be his Mother, because I have heard that yelp of terror before. I can almost smell their fear from here.

“There you are, Trouble,” Mother says. I feel her eyes study me from eartips to tailtip. “You are taking an interest in those we guide and protect.” She stands beside me and nuzzles me between the ears. “Especially I see you gaze at one of the young pups, the one who is so swift of foot.  I do not see him now.”

“Not only him.” I was watching when his grandfather named him. “The clan treats Runs From Snakes as a coward but he’s not.” He was just a whelp when he ran away from what turned out to be a harmless grass snake, but he didn’t know. He ran carrying his sister from what he thought was danger. I say he was brave. He still is, and still they treat him as a coward. “

“You curled your lip at his mother. That is no way for an Ally to behave.” She uses that disapproving tone that tells me I’m in trouble.

“She can’t see me.” Mother watches me intensely and I try not to twitch a whisker but I can’t sit still. I jump to my feet to face her. “Now he is nearly grown and he is always trying to prove himself worthy.” My hackles are up and I try to force them down.  Now I am in BIG trouble. I wish I could keep lips and hackles down and mouth closed sometimes.