Welcome back to another Write On Purpose book review. I review a well-written book, highlighting what makes it good from the reader’s perspective and what writing skills and techniques make it an irresistible read. Thus, each review serves both writers and readers.

This week’s review is a paranormal romance that’s more about the dead than the living. It’s called At the Corner of Magnetic and Main by Meg Welch Dendler. THe publisher puts this book in their mainstream category. I’d call it magical realism or paranormal, as it is about ghosts/spirits.

Welcome to all Meg’s fans and soon-to-be-fans who are enjoying the blog tour. Click the banner below to see the other reviews, interviews and other other fun stops on the tour.

At the Corner of Magnetic and Main by Meg Welch Dendler 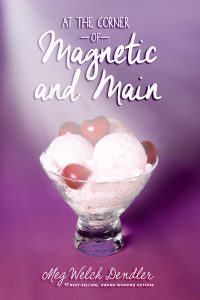 It’s hard to get on with your life when you’re already dead.

Penny had been stuck in the same diner for decades—ever since she died in 1952. Her diner was comfortable and safe. Serving ice cream to those who dropped in on their way to the next level of existence, she helped to ease their transition into The Light, the one place she can’t go. Her afterlife was perfect.

But when the ridiculously handsome, bad boy biker Jake Thatcher shows up and becomes stuck as well, Penny rediscovers feelings that she thought had been buried with her body.

Life is still life, and love is still love. But was her existence really perfect, or was it something else entirely?

Now for my review. DId I find this a magnetic read?

I enjoyed it a lot. Her’s what I liked and didn’t like about the book.

Have you ever read a book that feels as if it’s happening in a closet with the lights turned off? That’s what it’s like to read a book that LACKS a sense of place. As a reader, you want to feel the breeze, taste the ice cream, and see the story unfolding on your mental screen.

Dendler did a great job bringing the reader into a fictionalized version of Eureka Springs, Arkansas. I’ve be

en there, so I know she gave the essence of the place while not making it read like a Chamber of Commerce brochure.

The tourist town is in full swing in summer, and this tale happens in July, high season with all the hustle and bustle of Independence Day.You’ll even read about a small town parade, which reminded me of those back in Normal Illinois, where I went to graduate school. TUrns out Dentler grew up in nearby Champaigne-Urbana, which had similar parades, including the Fire Department, Shriners and the suual floats and bands.

A lot of the action takes place in a little diner which is at the corner that inspired the book title. Yes, “at the corner of Magnetic and Main” is indeed a fabulous book title. The alliteration, the name Magnetic – it all works.

Protagonist with a Big Problem

While the book actually begins with Jake, the story really centers around Penny, the former serving girl who’s been stuck in the diner for decades, port mortem. Penny is an interesting character who is…um…full of life, even though she’s both dead and stuck. She feels a sense of purpose, which is helping the newly dead who find their way to her diner adjust to their new status and pass into the light.

The other primary character in this book is Jake, young, cocky, and newly dead. While his sudden death opens the story, he is not actually the prime focus of the book. Penny is. Jakeserves as a catalyst for her and is integral to the big conflict that causes things to change at last for Penny. I won’t spoil anything around how that happens, but he is definitely a transformer in this book.

As the story progresses, these two face their issues in very different ways, with Jake constantly pushing Penny to change and her resisting because she feels what she does is necessary and important. I would definitely say Penny changes far more than Jake, and it really is her story.

As an author myself, I pay a lot of attention to how a novel opens. This one starts like a self-help book.

Continuing in this opening paragraph, the reader is told, not shown, Penny’s situation before ever meeting her.

Penny had lost sight of those hopes and dreams over the years. Today they would crash back into her life with a force that could not be ignored.

So I found myself a little ruffled immediately with this intrusive narrator and being told rather than shown a protagonist.

Next, we meet Jake partly through his own perceptions..

As Jake’s motorcycle climbed steep hills and roared down the other sides, he knew it had been worth skipping work that day to take a drive.

That sentence identifies him as reckless, so ther is insight into his character right away. The reader can soon surmise that he is young. (And for the record, I know an 8–year-old guy who owns a “hog” and is just as foolish with his choices on the road).

Fortunately, there is very little more of the intrusive narrator. Once we meet Jake, we’re into the story.

Story Does NOT begin with the Primary Protagonist

Generally speaking, chapter one begins with the focal character. While one could argue she gets a nod in that sentence outlining her plight, but that’s not the same as the action opening with her. Jake, the catalyst of change, begins the action. So the reader expects this to be Jake’s story until a few pages later. While narration switches deftly between the two, it is primarily Penny’s tale.

Despite what was for me an odd beginning, the tale captured my interest right away, and I was eager to get back to reading each day. Dendler did a great job delving into the point of view character’s thoughts and motivations throughout the novel. I cared what happened to them and came to understand wat made each special and interesting.

The dead come to life more than most of the living in this book. As an author, the people who feel most real to me are the ones that pop for the reader. When I read a book, I can tell which minor have their own life for the author.

A couple of minor characters jump off the page. One is a bus driver who provides interesting tidbits of local color as she drives. The other is an eccentric ghost buster who helps take care of a problem. You’ll also meet some “regulars” also dead, who inhabit the diner. It feels very much like the type of crowd one might encounter among the living at your own favorite local haunt. Pun very much intended.

A Good Read Even for those Who Don’t Like Paranormal

I love paranormal stories, but to me, this is a book about motivations, fear, and love that would appeal to those who typically don’t read ghost stories. 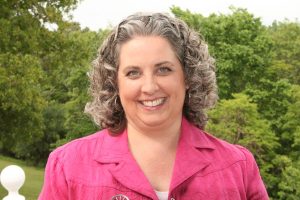 Meg Welch Dendler has considered herself a writer since she won a picture book contest in fifth grade and entertained her classmates with ongoing sequels for the rest of the year. Beginning serious work as a freelancer in the ’90s while teaching elementary and middle school, Meg has over one hundred articles in print, including interviews with Kirk Douglas, Sylvester Stallone, and Dwayne “The Rock” Johnson. She has won contests with her short stories and poetry, along with multiple international awards for her best-selling Cats in the Mirror alien rescue cat children’s book series.

At the Corner of Magnetic and Main is her first adult novel, but it won’t be her last. Meg and her family (including four cats and her dog, Max) live at 1,400 feet in the Ozark Mountains on what they call Serenity Mountain, just outside of Eureka Springs, Arkansas.

If readers sign up for my Reading Group they will get a free copy of my award-winning short story “Sonya’s Steps.” Here’s the sign up link for that: http://megdendler.com/readers-group-sign/

Tagged: At the Corner of Magnetic and Mainbook reviewMeg Welch Dendler