Book Review of Finding the Buddha by Eddie Tafoya

Interesting story behind me reviewing this book: I had a chance to read it before Mr. Tafoya had found a publisher. I was reading “slushies” (aka slush pile submissions or open submissions for a publisher. When I read the start of this book, I HAD to read the whole thing, and once I did that, I recommended they snatch it up.

Finding the Buddha by Eddie Tafoya 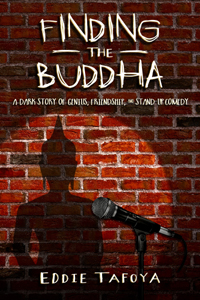 A dark story of genius, friendship and stand-up comedy. A mysterious man with a Midas touch delights the world but still seeks release from his own personal nightmare.

Mark Wladika can do just about anything. As a high school sophomore, he demonstrates an uncanny grasp of quantum physics. As a young Marine, he is a master of hand-to-hand combat, capable of taking out men twice his size with a single blow. He is a cosmologist, a philosopher, an observer of the human condition, and-unbeknownst to anyone-a man plagued by sorrow, loss, and deep longing.

One day, Wladika directs his genius to the art of stand-up comedy, and by doing so brings a new sense of hope to lackluster Albuquerque, New Mexico. As his fame grows, comedians, comedy aficionados, and businessmen alike believe that Wladika can transform the city, so much so that it will soon become to comedy what Chicago is to the blues, what New Orleans is to jazz, and what Hollywood is to movies.

Finding the Buddha is told through the voices of six characters whose lives the comic profoundly affects. Each hopes to benefit from the Midas touch of the mysterious genius who rockets toward the top of the comedy world, unaware that he doesn’t care about fame or fortune—he’s on a quest.

Praise for Finding the Buddha

Go read Finding the Buddha.
. . . The damned thing made me cry several times. At one point I closed the book because I had to absorb what I had just read. (You’ll know the part.) Anyone interested in phenomenology will also appreciate this text. Underneath the comedy (or maybe because of the comedy . . . I’m still trying to figure that out) is an inquisition into existence and finding happiness.

What makes Finding the Buddha a great read?

No doubt you’ve read some books with excellent stories but so-so writing from a technical or mechanics perspective. I certainly have.

Then there are books that grip you from the first page to the last and give you a reading hangover. I read this book several months ago, and it still sticks with me. If you are an author desiring to improve the technical quality of your prose, read and study how Tafoya uses words and grammar. I’ll show you an example shortly.

Here is how Eddie describes the first time he saw Mark, the focal point of the book:

Well, Mark walked up the three steps to the stage looking scared out of his mind. Totally mortified. Really, he looked like nothing. Like absolutely nothing. Not the least smidgen memorable about him. He was short, bald, and very white. I swear the child looked like somebody yanked him out of the oven an hour too soon. Like he should be hawking insurance, designing software, or selling used Chevrolets. Like he only had sex by default. I mean total Downtown Geeksville.

Such a vivid description that at the same time reveals.Eddie’s way of looking at other comics.

If you’re looking for a book about super talented people who have their whole life together, moving along at a smooth clip, then this is not your book. Finding the Buddha centers around the lives of Marc and several comedians who know and respect him. These are talented people whose lives are messy.

Life experiences forge anyone into the person he or she is. Comedians doubly so, because they put their most painful experiences on display in hopes of getting laughs from the audience. Actors become someone else. Comedians don’t.

Tafoya demonstrates a keen understanding of both human nature and the world of standup comedy. You will go deep inside each of the narrators who take up part of the story. No cardboard cutout characters here.

Here is a sample from one of the sections the character Eddie narrates:

I don’t know if you’ve ever been to an open-mike show at a comedy club, but the way it works is that about ten minutes before the show starts the manager calls all performers to the back and gives them the line-up for the night. About ninety percent of the acts are just God-awful, so horrendous they make you want to call your mother and cry. Mostly kids who go up on stage and drop F-bombs because that’s all their tender little minds pick up when they watch comedy on HBO or BET. They don’t understand that there is actually an art to this and it takes hard work. Usually, everyone getting on stage gets between three and five minutes, depending on how bad they are and how many comedians are on the bill. When you have thirty seconds left, the house manager shines a light from the control booth in the back, letting you know you have to wrap it up. If you’re not off in sixty seconds, they shut the mike off altogether and don’t let you go back on for two months. I swear they do. It’s happened to this little Firecracker. I learned my lesson the second time.

Writing a story from several characters’ point of view can be tricky. Too often, the narrators are not sufficiently distinct and the reader doesn’t get involved with them as individuals. Tafoya knows his comedians well and conveys each masterfully. You will never confuse Eddie for Mark.

It’s important for the author to dive deeply enough into the mind and viewpoint of each narrating character that the reader fully believes in the truth of that person. Each must be a complete individual, not a cut-out with a different name. Each character needs to be a complete person to you the author before it will ever feel genune to a reader. If you struggle with this, read Finding the Buddha

Read my 5 star review on Amazon

Eddie Tafoya grew up scurrying like a beetle through the dust, streetgrime, alleyways, and lavender dawns of Albuquerque’s Old Town, Downtown, and Uptown. Educated in Albuquerque’s parochial schools, the University of New Mexico, and Binghamton University, he has made a lifetime study of things comical, biblical, philosophical, verbal, and mystical. Since 1996, he has been a fixture in the Department of English and Philosophy at New Mexico Highlands University, where he teaches classes in creative writing, the New Testament as revolutionary literature, and stand-up comedy as literature. He lectures around the Southwest on the history, theory, and impact of American comedy and, when time allows, works as a stand-up comedian, a venture that has taken him to various venues from Wisconsin to Arizona and to feature spots on television shows like The After After Party with Steven Michael Quezada and The Duke City Comedy League.

His other books include The Legacy of the Wisecrack: Stand-up Comedy as the Great American Literary Form and Icons of African American Comedy. He lives, writes, and teaches in Las Vegas, New Mexico.