Writing a story is fun – and it’s a craft that takes practice, like any other. I also love reading 5-star reiews from readers who took the time and trouble to write a review.

This humorous paranormal tale includes a vampires, ghouls, and even a ban-shee with a personality disorder.

What People are Saying about A Tasty Morsel

I am so excited about my latest review of A Tasty Morsel!

“More than everything, it’s a memorable piece that stands out in a sea of common, overused themes.”

from a review by Tom Jones

“I loved the book because it took me on a journey from unexpected to almost-expected. Then again to unexpected. ”

from a review by Michael Craig

What Inspired the Story?

I live in the Ozarks, which is a beautiful area populated with fun hillbilly/redneck characters, tourists from all over, and, in my imagination at least, a host of undead, immortal, mystical and mythical beings. Oh who am I kidding? They’re real! 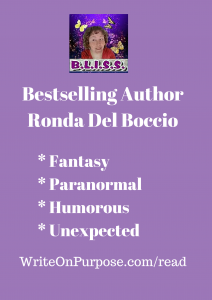 I set this story at one of my very favorite places, Dogwood Canyon. When I was taking a tour, our guide said someone had just discovered a cave hidden in the rocky hillside. My storyteller’s brain went into hyperdrive immediately. I thought, what if someone discovered a vampire in that cave? This story was born. It is the first of a collection of connected tales you will see from me.

Excerpt from  A Tasty Morsel

Ellie caressed the damp, rough wall of the cave. Her climb up the vertical hillside had invigorated her, and now she relished the coolness of the cave she had discovered nestled in Dogwood Canyon. How long has it been since anyone found the well-concealed opening and explored its secrets? She smelled and tasted the damp darkness as she carefully investigated the rocky landscape. At her chest level was a smooth area the size of her palm. When she touched the cool imprint, a deep groan echoed. The wall jerked inwards, revealing a musty room.

Her heart pounding, she picked up her small lantern and stood at the stony doorway. A new layer of dampness from inside the chamber assaulted her nose. This place had been sealed off for a very long time, judging by the dank odor. Ellie pointed the light inside. It cast oddly shaped shadows around the room. She felt like a detective on a tough case as she noted each nuance of rock.

One cave she had found last year had ancient paintings of successful hunts on the wall. She always thought that perhaps such drawings were mental visioning and preparation rather than a prehistoric newspaper of past events, as she had been told in school. Would there be paintings here? Or maybe ancient tools left behind?

Before stepping inside, Ellie illuminated the floor. She felt her lips curve into a smile. This would be a new adventure, and she always felt her breath quicken in anticipation whenever a new adventure presented itself. As she cast the yellow orb before her, a shape she did not wish to see made her hold her breath. Was that a human foot?

Her heart quickened. She inched forward. A foot, a leg, a hand – a man? Yes A pale and emaciated man lay with a pole through his heart.

“Oh, fantastic.” Her voice sounded strange in her ears. She would have to report this discovery to the Morris Foundation. “I would be the one to find this.” Frowning down at the body, she decided maybe if she could close the wall again, nobody would ever know about the burial chamber. If that’s what it was.

But this couldn’t be a burial chamber. Could it?

Tempting as it might be to close the wall and say nothing about the hidden chamber, curiosity gnawed at her. There was something very strange about this body. Part of her wanted to get out of there; she told that part to shut up as she knelt beside the man.

Calling on her science training, she mentally catalogued the specimen: Male, about five feet, eight inches tall, long brown hair, small frame, no sign of decay, no dried blood, odd clothes giving a feeling that he dropped in from the past. Cause of death: starvation.

Start Reading A Tasty Morsel in Under a Minute